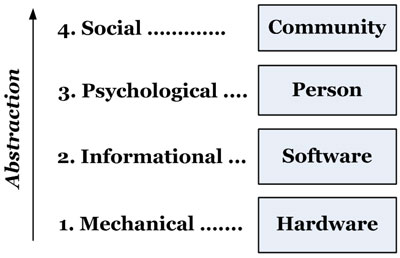 HCI began in the personal computing or PC era. Adding people to the computing equation meant that getting the technology to work was only half the problem — the other half was getting people to use it. Web users who did not like a site just clicked on, and only web sites that got hits succeeded. Given equal functionality, users prefer a more usable product (Davis, 1989); e.g. Word replaced Word Perfect because users took a week to learn Word Perfect but picked up Word in a day. Just as computing had previously gained a software level, so it now gained a human level.