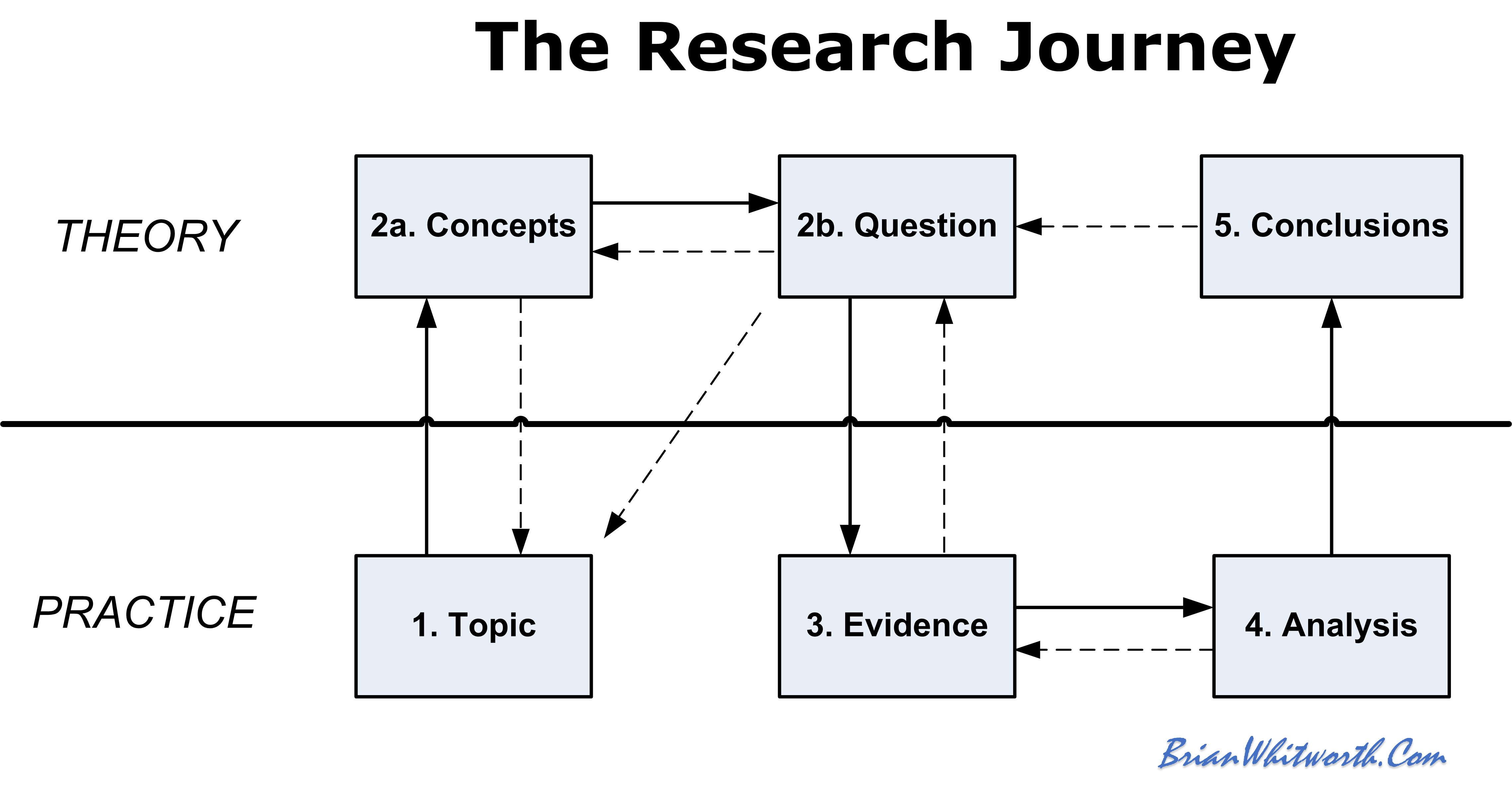 The research journey seems simple enough – ask a question then gather evidence to find an answer. One chooses a topic, clarifies the concepts involved to form a question, then gathers evidence and analyzes it to form conclusions. This gives these steps: 1. Pick a topic, 2a. Review concepts, 2b. Ask question, 3. Gather evidence, 4. Analyze it, and 5. Form conclusions, as in the figure above. Yet it turns out that doing research is not simple at all, for two main reasons:

Knowledge is holistic. Holistic systems are defined not just by their parts but also the interactions between those parts. Knowledge is holistic because it does not add simply, as a grain adds to a pile of sand. A pile of sand as the aggregate of its grains means that adding one more only changes it slightly. In contrast, a mental structure as a set of interacting ideas means that adding one more to can change the whole meaning, e.g. to add one word to the sentence “I love you dearly as my life” to give “I love you dearly as my life, not” changes the meaning entirely. The figure shows this by putting concepts in the realm of theory and evidence in the realm of practice. The difference between theory and practice is critical to understanding how research turns practical evidence into theory knowledge. Knowledge emerges from practice as information emerges from physical events, as a higher way to view reality. This is why creating new knowledge is not just a matter of adding new “facts” to an existing “pile”. If science was just “filling a knowledge bucket”, surely we would have done it by now? The “bucket of knowledge” does not fill because every question answered creates more. When Einstein discovered that time varies with the observer he changed all physics, as did quantum theory’s discovery that all physical events are probabilistic. We know more than before but are no closer to a theory of everything, as every answer creates more questions. As what we know expands, what we don’t know expands more! A true scientist knows that they don’t know.

Research is not linear. When you ask scientists how they did new research, the answer is nothing like the apparent logic of the figure above. Research is more like stumbling in the dark than taking an express train, so the arrows in the figure go back as well as forward. One might head off in one direction only to find a dead-end and have to go back and start again. Finding the right question is not easy, so false starts are the norm not the exception. It is like drilling for oil, where one might drill in a likely place to find nothing then drill in an unlikely place and find it. Research is discovered not crafted, so the journey is often convoluted not straight. Of all the people in the world, only Einstein asked what happens when an observer rides on a beam of light and only he found evidence to conclude that time must stop. And it took a Darwin to ask why animal species were just so and gather evidence to conclude they evolved by observing species on different islands. Such questions had not been asked before because everyone “knew” what time was and everyone “knew” that life was always as it is now.

Science is not a set of answers but a way of asking questions, a way of gaining knowledge that evolved over hundreds of years based on the premise that we don’t know. This may seem strange, as the aim is to know things, but it is not knowing that creates knowing. We see science as modern, compared to say the ancient wisdom of the east, but the founders of Buddhism, Taoism, Confucianism and Science all wandered the earth at about the same time (600BC). When you do research, you are following a wisdom tradition as ancient as any, for it is as hard to question and validate rightly as it is to think and act rightly. In this tradition, everyone “knows” but a scientist is one who knows that they do not know. The next section considers the research method as the vehicle of the scientific journey.