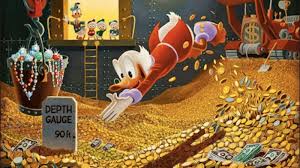 Money is information. Money was invented to symbolize value in trade exchanges, e.g. to buy a cup of coffee, rather than bringing something of equal value to barter we transfer money to the coffee maker. Money is the social token that facilitates the trade. So just as Monopoly money has no value outside the game, dollars have no value outside society, e.g. to a man dying of thirst in a desert, a glass of water is worth more than a $100 bill. Over time, money as a means to increase synergy became an end in itself. We have images of Walt Disney’s Scrooge McDuck gleefully diving in his piles of money, but today billions are just a number on a computer screen. Thanks to technology, we are on the way to a cashless society, as cash is rapidly becoming obsolete in urban China. Now people pay by waving a card or smartphone, showing that money is a not thing in itself but is, and always was, just information. Making profit the goal is a mistake, because it distract people from the original goal of synergy. Profit corrupts health, education and politics by making people forget their real purpose.

Hunting and gathering information. Companies on the Internet are the hunter-gatherers of the information age, who just take and move on. They gather data and hunt attention using AI tools but the tactic is the same. Yet just as harvesting a field year after year reduces yield, so endless ads stealing attention kills the social environment. Profit seekers take and leave regardless of their effect on the environment, thinking “I will move on so it doesn’t affect me“. Yet as humanity is now global, there is increasingly nowhere to run from the effects of our own activity, as climate change illustrates. The only sustainable way is to cultivate and stay rather than take and leave. We need to give and take, not just take.

The opposite of profit. The opposite of profit is not non-profit, which is just trying to break even. The opposite purpose to profit, or benefiting yourself, is to benefit others. This is not just charity, the rich giving to the poor, but cultivating synergy, e.g. Airbnb, an online service for people to rent short-term lodging like holiday cottages, apartments and home-stays cultivates synergy but is not a charity. Some say “Who would have thought that letting everyone be a hotelier would work?” but the synergy was always there for a global community. Likewise Uber succeeded by letting everyone be a cab driver. Cultivating synergy is not about redistributing wealth but finding positive synergies between people in a community.

Cultivating synergy. In Internet terms, to cultivate a synergy means to help other people, or help people to help each other. For example, tech sites like AnandTech let people with a hardware problem go online to find another person who has already solved it, so what might otherwise take days to solve is solved in seconds. In this synergy, everyone shares and everyone gains. Arpanet, the Internet’s predecessor, was built on the idea that computers worked better together than alone. The Internet was founded on synergy and so has encouraged alternatives to traditional give-take trade:

All the above make money in some way to survive but it no longer comes first. Online systems today differ from business tradition (Kolbitsch & Maurer, 2006) in following Rule 3b, to do good first. The result has been a huge increase in people helping people. The profit motive is not dead but it is no longer the king. Technology has changed the focus from profit first to synergy first, but the temptation, as always, is to become “evil”, i.e. to take more than one gives. 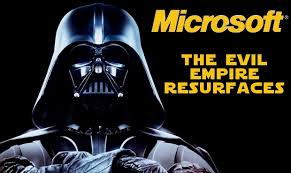 Who is the evil empire? In the Star Wars movie, the evil empire tried to control and dominate all resources and people. Someone should write a history of Silicon Valley called From Idealistic Startup to Evil Empire. Microsoft was the classic garage startup that within a few decades became an evil empire based on its reputation for aggressive digital rights control and dirty tactics against rivals like Netscape. In 2000, this led to a Department of Justice anti-trust action that nearly destroyed the company. Bill Gates had to testify before Congress and was chastised. Today, as giants like Facebook, Google, Apple and Microsoft dominate their respective domains, each is tempted to be the next evil empire, e.g. instead of injecting 99% useless ads into people’s feeds, Facebook used AI to analyze people’s posts and messages to get targeted ads, allowing its software to spy on people to profile voters in the Cambridge Analytica scandal. Like Bill Gates, Mark Zuckerberg had to testify before Congress that “We do not sell user data”, even though selling advertising access based on profiling is much the same thing. People want to link to family and friends not be probed by a sales algorithm. As Chris Herd says:

I don’t want to sell my soul to an advertisement machine designed to hijack my attention and exploit me.

Facebook lost trust with this affair, as to be evil is to lose social support. Those who abuse others are exposed, shamed and banned – lest this be considered toothless, consider how social media pressure ended Harvey Weinberg’s career in months, when a law suit would have taken years and still probably failed. Society is always the elephant in the room, so Jared Lanier’s Ted talk warning that the Internet needs to avoid the dark side should be heeded.

Good is good. When Google began in 2000 Microsoft was the evil empire, so it took the motto “Don’t Be Evil” and today its motto is “Do the right thing“. Likewise Facebook began as a free service to link family and friends, i.e. also began doing good. Doing good created their success and now over 80% of referral traffic comes from these companies. They seem too big to fail but every Internet customer is just a click away from emigrating to a better place. The society that defines their success will abandon them if they abandon it. They survive by their good name, and Google services like GMail, translate and maps help this. The profit mantra that “Greed is good” is giving way to the social mantra that “Good is good“.

The principle of enough. History is told as a tale of power but progress is about changing people’s hearts and minds. As long as people make profit their primary purpose, nothing will change. It is true that without profit one cannot survive, but what about after that? Does one then seek more and more profit? This is when profit goes wrong. If the goal is profit there is never enough, but after getting enough profit doesn’t matter anymore. Bill Gates realized this when his wife asked him to give his billions away instead of making more. The consumer ethic brainwashes us to believe that we must consume to be happy but this is simply not true. Money increases happiness up to a point after which it has no effect. Why get more money than can be spent in a lifetime? Beyond profit, only giving to others increases happiness. The desire to consciously contribute to the world sits above the desire to profit for oneself. As people go beyond the profit motive we can imagine a society that follows Kant’s imperative – to do the right thing regardless of personal benefit. The sign will be when the rich list is a list of shame not envy. When people have had enough of profit, the synergies beyond it will emerge.