Virtual games exist to benefit players not themselves, so the aim of Civilization isn’t to rule a virtual earth nor is that of Warcraft to conquer orcs. Those are player aims but games exist to give player value regardless of game result. The same applies to simulations, as we don’t care if a virtual plane crashes in a flight simulation as long as the pilot learns. In general, virtual realities exist to benefit those who experience them, so a virtual world that exists by and for itself alone is utterly pointless. If our universe is a virtual reality, it must benefit its observer but who exactly is that in this case?

In quantum theory, observation collapses a quantum wave in a physical event, so like time and space, observation had to begin when our universe did. The first quantum collapse after the universe began was triggered by the first observation. As it occurred before matter or information existed, it can’t derive from either. Our universe was then first observed by photon entities on a quantum scale so small we can’t imagine it. If to observe is to experience, by the first fact, it must have always been so, as what could make it so later? Light was the first observer of our reality.

Quantum theory also requires a photon to choose from its distribution where it hits a screen, irrespective of physical history. Physics calls it random, as if it had no value, but if quantum choice also allows our attention, it is a choice worth having. To call photon choices random but not apply the same logic to our own choices isn’t scientific. The simplest conclusion is that photons also choose, so choice also existed from the beginning but again on a quantum scale.

Observation and choice are critical to quantum theory because it needs them to work. When electrons interact, quantum waves overlap until a physical event entangles them into an ensemble that spreads waves again. This suggests that being the same entangled entity lets them observe each other at that moment, which gives observation a quantum base.

Quantum theory began when it was found that energy exists in discrete units or quanta. Light also exists as a stream of photon units, as Einstein showed. That a photon wave can spread over a galaxy then restart at a point implies it is an entity. A physical wave that exists over its wavelength can’t do that but a quantum wave is an entity because it can restart its existence at any point in its distribution. In human terms, that entity is it’s being, defined as what it really is, so our universe began as photon beings that observe and choose.

A photon’s being is infinitesimal but all later beings, including us, came from this primal ground. The observer began small but as quantum entities entangled, coherence increased being. Most entanglements collapse quickly but some survived as matter that evolved into life, then sentient beings like us. To create the perceptions we experience, nerves process sensory data and synchronize their firing to evoke an observer, hence brain waves correlate with consciousness. To call oneself “I” needs data processing functions like language and the unity of consciousness. Sentient beings, that think about reality and experience it, evolved from what came before.

Figure 6.41 expands Wheeler’s observing eye universe to include the role of consciousness.

Figure 6.41 A quantum universe observes itself as a virtual reality 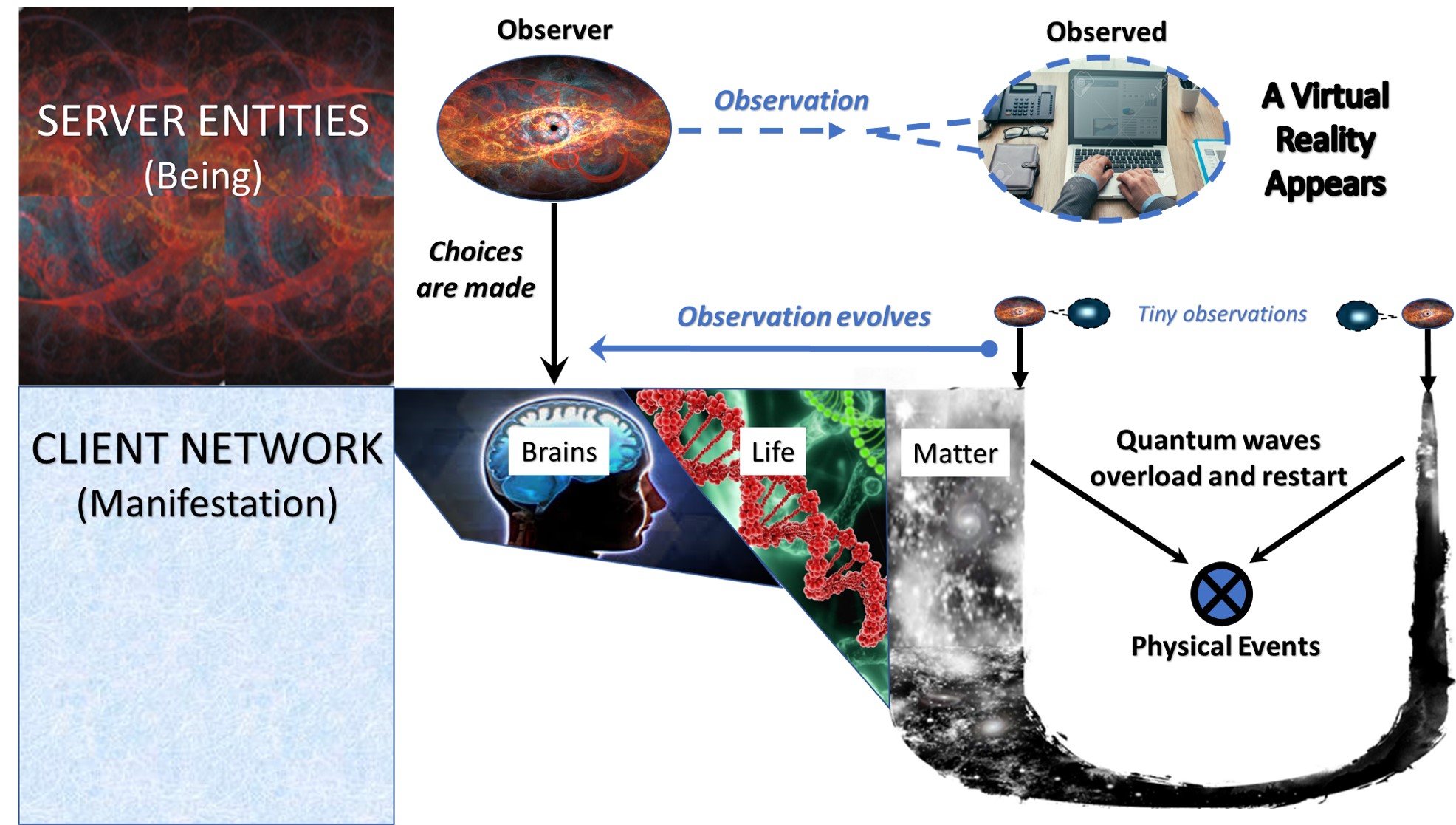 In the beginning, quantum reality existed alone, as the only reality. Our universe began when one quantum entity gave its activity to its neighbors, creating one photon in a unit of space, and others followed suite until space expanding stopped it. This separated the primal reality into:

1. A server space, whose entities generate and restart quantum waves as needed, and

2. A client space, on which quantum waves spread and interact in a lawful manner.

The client space is our physical space, where physical events occur, while server space hosts the entities that observe them. Our universe, the U in the figure, consists of quantum waves generated by quantum entities that observe their interactions. Potters make pots from clay that already exists but what existed alone had to make the observer and observed from itself. One reality divided into observer and observed to observe itself, as follows:

3. The physical event makes the quantum entities involved restart at a chosen point.

4. Restarting at the same point entangles them into a larger quantum entity.

5. The entanglement generates an observer experience.

6. This experience reflects reality at that instant but doesn’t exist in any other sense.

Each physical event is symmetric, as two observer-observed pairs generate inner experiences of an outer reality. What is seen depends on the observer so in physics, if observer A sees two events as (T1, T2), observer B can see the same events as (T2, T1). That the same thing can be seen as physically different means physical reality is generated i.e., virtual.

A physical observation is also only a snapshot of a reality that is itself the quantum events preceding it. A physical event takes one quantum cycle but countless quantum cycles led up to it, so it is like a camera that takes a photo of reality every million years or more. As the observer chooses one experience after another, the physical world is generated as a virtual reality.

In Figure 6.41, quantum waves create physical events with tiny observations, that then formed electrons, quarks, atoms, molecules and macro-molecules like RNA that observed more. Biological evolution then took over from matter, as simple cells gave the complex cells of plants and animals. At each stage, quantum entanglement increased the observer until now brains create human observers by a cascade of neural synchronies that entangle nerves. Evolution expanded the U in Figure 6.41 to the left to increase consciousness. Part of a universe of light became matter, some matter became life, and some life became sentient. Most of the universe isn’t sentient but the trend to increase the observer is clear. Observation built up step-wise from the first observers until now, billions of years later, we can see the grandeur of what created us (Figure 6.42).