Is a virtual world necessarily fake? Consider the following case:

“In June 2005, Qiu Chengwei, a Chinese national, won a virtual sword in the online game Legend of Mir 3. He lent the sword to a fellow gamer Zhu Caoyuan who subsequently sold it [on eBay]. When Qiu reported the incident to the police he was told a virtual sword was not real property and was not protected by law. Qiu went to the home of Zhu and stabbed him to death in a very real crime for which he is now serving a life sentence.” (Power, 2010) p188

The stolen sword didn’t physically exist but it was real enough for those involved to sell, buy and kill for. It follows that for all intents and purpose, the Mir sword was real even though was just an information entity. As another example, Bitcoin is worth billions yet what it produces is not physical. This requires us to redefine reality from “What exists” to “What exists to an observer”, which applies equally to physical things by the observer effect in physics.

Adding the observer to the definition of reality is consistent with current physics. It doesn’t mean that we unilaterally create reality as in solipsism, but that every reality event is an observer-observed interaction. The benefit of this definition is that it allows disciplines like sociology, psychology and computing to study social, human and information systems that are real. For if information wasn’t real, or if cognition wasn’t real, or if society wasn’t real, the sciences of computing, psychology and sociology would be the study of unreality. It is argued elsewhere that social, personal and information levels emerge from the physical level (Whitworth & Ahmad, 2013). Quantum realism then proposes that the physical world that physics studies emerges in exactly the same way, as an observer view.

In Figure 1.5, each level is an observer world view. This allows sociology to study social systems, psychology to study human systems and computer science to study information systems that are real. It also allows different views of reality to exist at the same time, e.g. a cell phone is hardware and software at the same time. Describing the hardware doesn’t define the software and describing the software doesn’t define the hardware. Software and hardware are just different ways to view the same reality. The observer chooses the hardware view to address a hardware problem and chooses a software view to address a software problem. In the figure, each reality level emerges from the last as a way to interact with reality better. Social structures emerged from human meaning (Bone, 2005) that emerged from neural data that emerged from physical brain events because seeing reality in social terms improved survival (Hogg, 1990).

The Mir sword didn’t exist physically but it was an information entity in the Mir database, it was a cognitive entity in the mind of its owner and it existed to the Mir community, so by the new definition it was real. If a fantasy is real to only one person, the Mir sword was not that. It existed by common consent and was even a scientifically real subject of online research. In a society, for one to sell what one doesn’t own is unjust, and as the police had no remedy the owner took justice into his own hands.

If social constructs emerge from human thoughts that emerge from neural information based on physical events, is the physical world the end of the line? Physical realism says it is, arguing that everything reduces to physical events so only the physical really exists. Yet if physics was the end of the reality line, it would be observer free, which it isn’t. In quantum realism, which is based on quantum theory, real quantum waves only become physical when observed, not before. It follows that physics, like the other sciences, is just another way to view reality. As the great eighteenth century philosopher Kant concluded, we don’t see things as they are in themselves (Kant, 1781/2002). We only see a phenomenon or view not the noumenon or thing in itself. If the quantum world is real, physical reality emerges from quantum reality in the same way that information emerges from physical reality, as an observer effect (Figure 1.6). 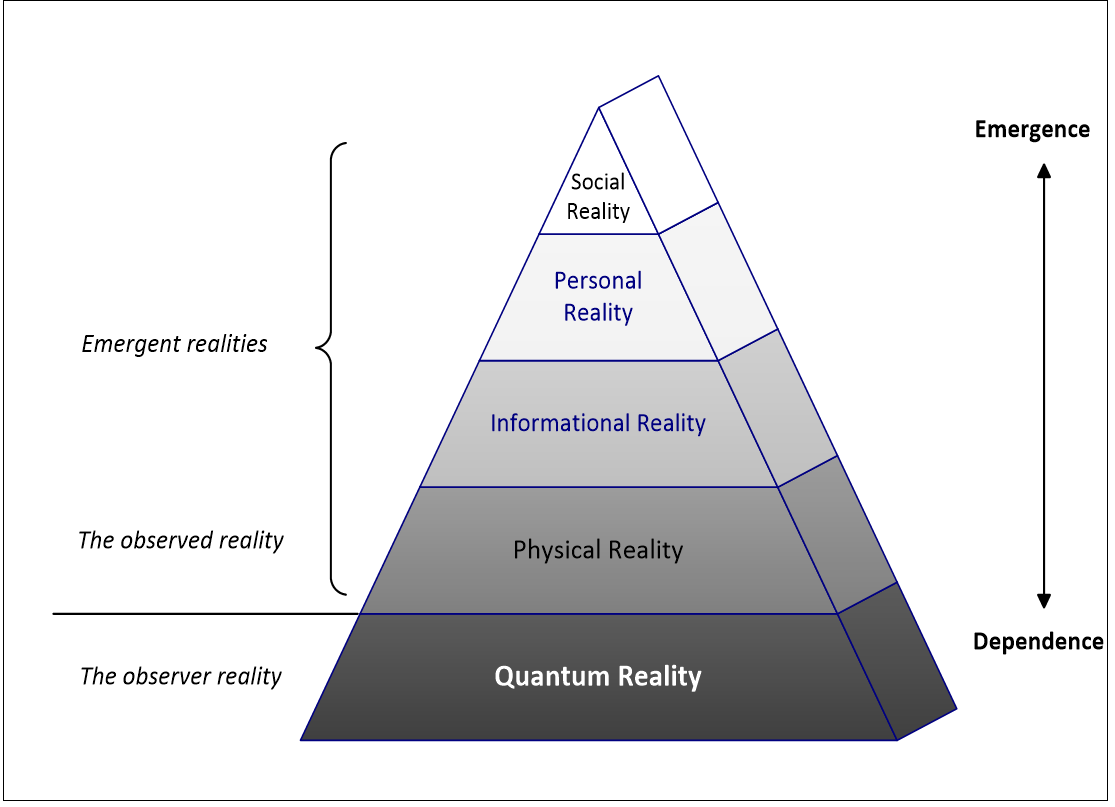 My mirror image is unreal because it only exists when I look. My body still exists even when I don’t look but the image only happens when I stand in from of the mirror and look. I am seeing reality by means of an image that is not in itself real. Quantum realism is that we see the entire world in the same way, that the physical world we see is created by a quantum world we don’t see.