Every periodic table element has a different number of electrons organized in shells. The number of electrons in a shell is the number of elements in a row of the periodic table and each row ends in an inert element like Neon. Neon doesn’t interact with other elements because all its electron shells are full so it doesn’t exchange electrons. In contrast, non-inert elements do exchange electrons in chemical reactions. Every chemical reaction, from acidity to oxidation, is atoms exchanging electrons to complete their outer shells in the now familiar search for stability. Stable molecules form when atoms with extra electrons donate them to those with deficits in chemical bonds that complete their electron shells.

The current electron shell description is based on two quantum numbers:

The shells and sub-shells were deduced from spectroscopic data analysis as shown in Table 4.7, where sub-shells called s, p, d, f, g and h contain 2, 6, 10, 14, 18 and 22 electrons. The logic was that the shell orbit could fit more electrons as it increased, so doubling the first two electron orbit quadrupled the area to allow eight electrons, tripling it allowed eighteen, quadrupling it thirty-two, and so on. sub-shells. Electrons then filled shells and sub-shells according to quantum numbers, so the inner orbits with fewer electrons filled before outer orbits. Hence the first row of the periodic table has the two elements Hydrogen and Helium, the second row has the eight elements Lithium to Neon, and so on as the periodic table grew. 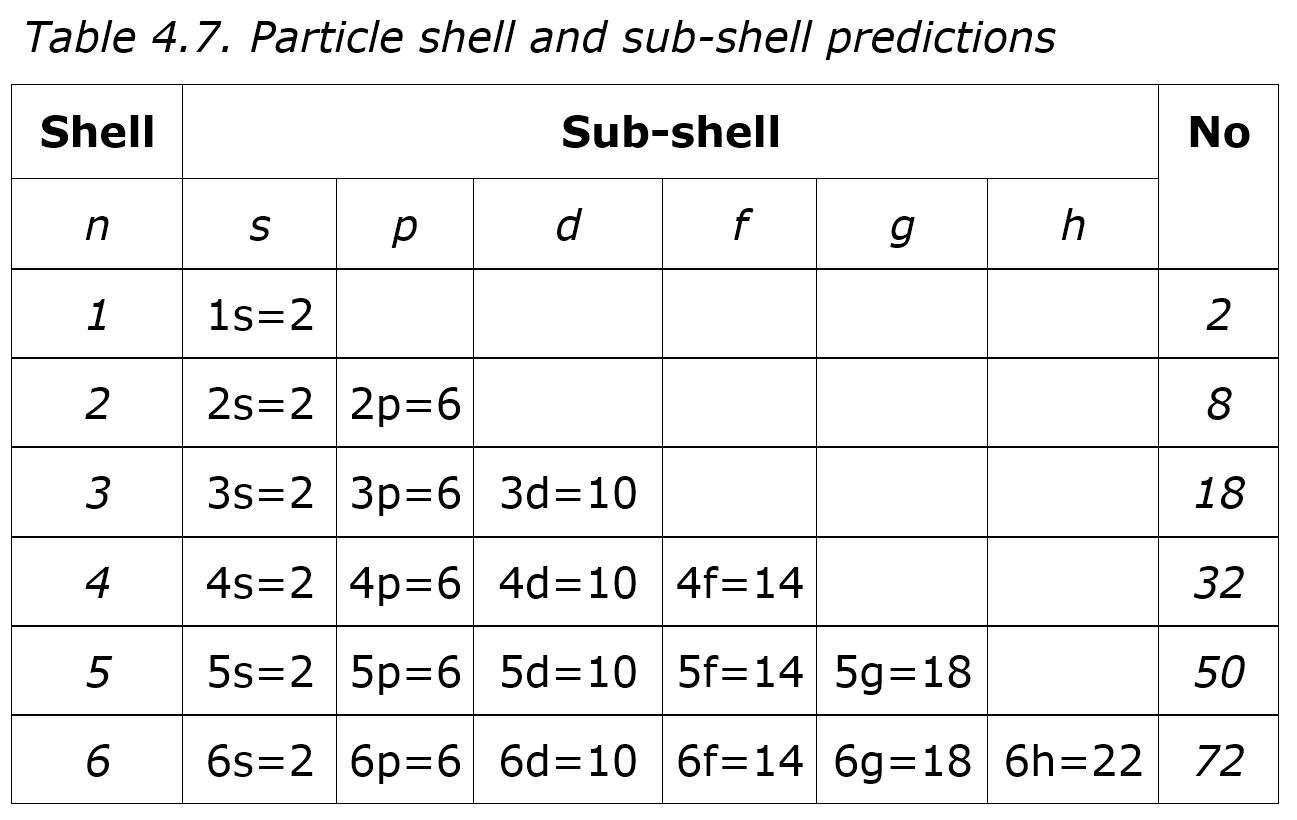 This worked nicely except the third row is still only eight elements, including the carbon and oxygen we need to live, and the expected eighteen elements only occur in the next row. The initial model predicted periodic table rows of 2, 8, 18, 32, 50 and 72 but instead the rows were 2, 8, 8, 18, 18, 32 and 32. So in the by now well-established practice, theory was fitted to fact by tweaking the model so the sub-shells fill in this odd order:

The “logic” here is that it works if the third shell “fills” with an empty sub-shell, so generations of chemistry students have had to learn that Argon completes its third shell without the 3d sub-shell, even though that denies what a sub-shell means. If they asked why, the answer was because it does!

Instead of using abstract quantum numbers, that electrons actually exist as quantum waves predicts these properties:

1. Shell. Shell circumference around the atom nucleus that fits the electron’s lowest wavelength.

2. Sub-shell. The harmonics that the shell circumference allows.

The electron wavelength arises from its photon structure. If an electron is extreme photons entangled in a collision on one axis, they will also restart on other axes as extreme photons that vibrate up one cycle and down the next. The minimum shell circumference will be half this wavelength and this fundamental harmonic is the s sub-shell.

The next shell will have a circumference double that of the first shell, to allow not only a bigger fundamental but also a second harmonic that is twice the frequency. This second harmonic is the d sub-shell.

Figure 4.23 shows how larger shell circumferences can have more harmonics where the number of waves that concurrently occupy each length is given in the right-hand column. The periodic table can now be explained using electron waves as follows:

2. The second shell has a one wavelength circumference, which is double that of the first. The first harmonic for this circumference again alternates up and down giving a 2s sub-shell with two electrons. The second harmonic (Figure 4.23b) can accommodate two electron waves at the same time which for two directions is four electrons. The complex harmonics of two-dimensional waves, such as appear on a drum surface, allow two more electrons, giving six in total for the 2p sub-shell. The second shell thus allows eight electrons, giving the second row of the periodic table, Lithium to Neon.

3. The third shell has a one and a half wavelength compared to the first, as it triples the first circumference. This again gives 3s and 3p sub-shells but the next harmonic can’t occur. A bipolar (up-down) wave can vibrate once on a string half its wavelength and twice on a string of its wavelength but on a string one and a half times that, the result self-destructs. Adding another half-wavelength adds no new harmonics so the third shell, like the second, allows only eight electrons giving eight elements in the periodic table third row. An electron wave model has no 3d sub-shell.

4. The fourth shell has a two-wavelength circumference, which quadruples the first. Four times the first radius allows a new harmonic that accommodates four electrons per circumference which for two directions is eight (Figure 4.23c), plus two complex harmonics is ten. The 4s, 4p and 4d sub-shells give 18 elements in the periodic table fourth row as observed.

5. The fifth shell, like the third, allows no new harmonic, so its 5s, 5p and 5d sub-shells repeat the previous total of eighteen, giving the periodic table fifth row, again as observed.

6. The sixth shell allows a fourth f harmonic with six electrons (Figure 4.23d) which doubled is twelve plus two complex harmonics is fourteen. This plus eighteen from the s, p and d harmonics gives the thirty-two elements of the sixth periodic table row that include the Lanthanide series.

7. The seventh shell again has no new harmonic so it also has 32 elements, including the periodic table Actinide series.

An electron wave model then fills the periodic table as follows:

Electrons now fill shells and sub-shells in strict order, with no strange jumping between them, based on:

1. Shell. The first shell circumference is half the wavelength of the highest frequency of light, i.e. a Planck length. The larger shells are multiples of this (1, 2, 3, 4, …).

2. Sub-shell harmonic. Where s is the first harmonic, p is the second harmonic, and so on.

Electrons fill in the order they do based on:

1. Shell order. Each shell is a greater circumference. If an electron were pure light a longer wavelength would be less energy but it has a mass dimension so larger orbits require more processing and more energy. Shells then fill in the order 1, 2, 3 etc. because smaller orbits need less processing.

An electron wave model explains the rows of the periodic table as caused by the harmonics that a shell circumference can accommodate, so electrons fill the shells with no tweaks needed. In quantum realism, electrons in atoms are quantum waves described by wave harmonics not abstract quantum numbers.